How much does NFT Minting cost? 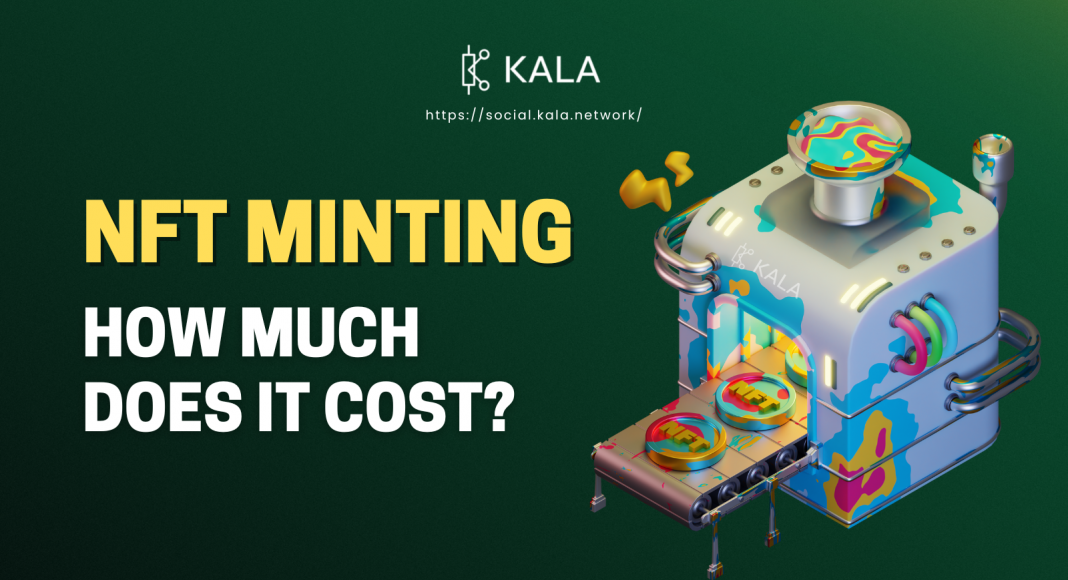 What is NFT minting?

Minting, in regards to NFTs, is the process of taking a digital asset and converting the digital file into a digital asset stored on the blockchain. The digital products or files will be stored in a distributed ledger or decentralized database and cannot be modified, edited, or deleted. Once the asset is minted and officially an NFT it can be bought and sold using cryptocurrencies at an NFT marketplace.

What is charged when you mint an NFT?

Before proceeding to mint your NFT, you should know that the blockchain you choose to can have a significant impact on the cost of production. Other factors that contribute to the minting cost include the time you’re minting (nighttime is better, less traffic) and the floor price or secondary market value. So, consider this before proceeding with the creation.

Some of the most likely fees that you’ll be charged when minting NFTs include:

How much does NFT minting cost?

The long answer is that the cost can vary from $1 up to $1000. Over the years, NFTs have developed a range of use cases from virtual worlds to audio files and art. This development has resulted in the volatility of the cost of creating or minting NFTs. And the fluctuating prices have been a matter of debate among NFT artists.

Many popular NFT crypto wallets will allow people to create their crypto art and publish it on the blockchain without charging any NFT minting fees.

However, some platforms have a basic NFT mint price which ranges from $70 to $120. The price charged to mint NFT is to provide some assistance to get you started.

Interestingly, during peak times, the cost to mint NFT has risen by $200-300. Reportedly, people have also tried to mint and sell their NFT on Rarible for $600.

NFT mining cost is volatile because of their direct relationship to the gas fee. The gas fee is directly transferred to the miners who pump out the computational power necessary to verify the transactions.

Therefore, updating prices and listing pieces for sale, and transacting the collectibles takes a “gas fee.” Interestingly, depending on the network congestion, the gas fee can vary wildly from one moment to the next, especially when there’s a lot of activity.

Hence, due to the volatility of gas fees, NFT minting cost is also highly fluctuating in nature.

Lazy minting allows NFT artists and creators to mint their NFTs without any upfront costs.  Rarible, the major platform, has recently developed a new feature dubbed “Lazy Minting.” Lazy minting allows you to upload your NFT onto their site without worrying about minting it immediately.

Your NFT will be shown, and if a buyer comes along who wants to buy it, the minting procedure will commence, and the charge will be added to the final purchase price. Who pays for it? The buyer.

This allows those of us who are short on crypto to enter the game with less reliance on digital cash. The playing field is becoming more even by the day.

The NFT minting cost depends on a varied number of things. Hence, it becomes imperative for NFT enthusiasts to have knowledge of the different elements of NFT minting fees and the factors that affect the price to mint NFT so that NFT minting cost does not drain their bank accounts.

In addition, NFT creators and artists should compare different NFT platforms and choose the one that enables cheap NFT minting. Once they follow these basic practices and even use gas fee prediction tools, they’ll be able to put their work on the blockchain with a minimum NFT minting cost.